Energy prices and inflation: it's complicated 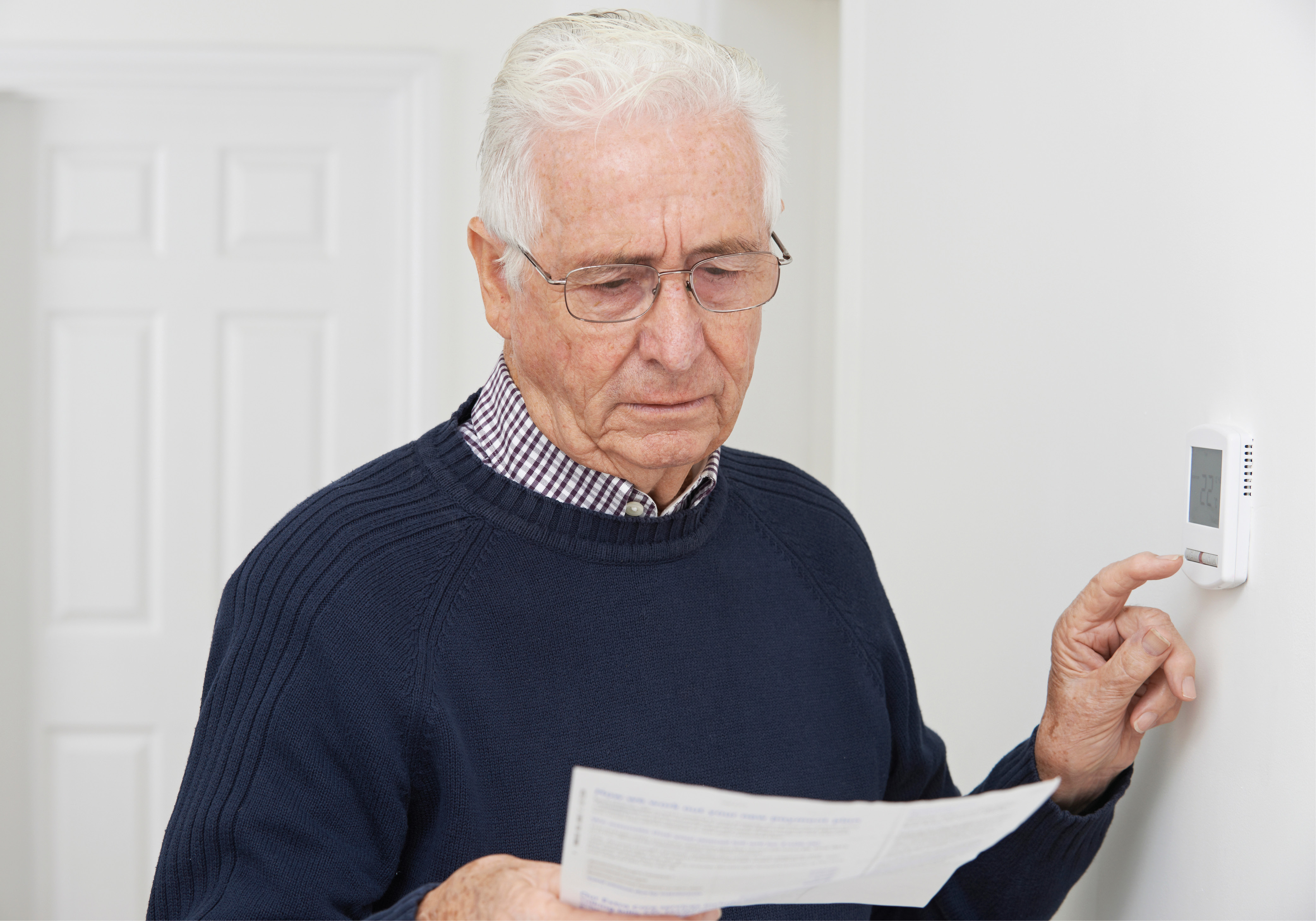 Since peaking in late August, wholesale natural gas prices have fallen sharply. However, this drop is not yet visible in the inflation figures. In fact, according to the consumer price index, gas prices rose yet again in October, up 23% compared to the previous month.  To demystify this paradox, we explain in this article how wholesale prices trickle down to contracts with energy suppliers and how energy prices are reflected in the measure of inflation. In doing so, we also show that the choices Statbel (the Belgian statistics office) has to make when compiling the consumer price index are not straightforward.

If you are lucky enough to still have a fixed-price contract, concluded before the start of the energy crisis, you are in the minority. Such contracts are no longer offered today, meaning most contracts are now variable price. In other words, the price is regularly adjusted to reflect wholesale market fluctuations. For October, many contract prices had not yet been adjusted to reflect the sharp price drop on the wholesale market. Nonetheless, this practice is in line with the terms of such contracts, and adjustments will be made shortly.

The price of a variable contract is “indexed” based on an indexation parameter. (Ever heard of TTF101, TTF103 or ZTP101?) These parameters can be adjusted monthly or quarterly and are often an average of future values (i.e., prices for delivery in the future) from the previous month or quarter.

Gas futures have fallen sharply since peaking in August. However, according to the consumer price index, gas prices continued to rise in October. Indeed, high wholesale prices over the summer translated into higher quarterly adjusted index parameters (e.g. TTF103). The parameters adjusted on a monthly basis (e.g. TTF101) cannot keep pace with those adjusted quarterly, even though they already reflect recent relaxation on the wholesale market. Based on the current rate schedules, we expect the sharp fall in gas prices to be reflected in the November consumer price index. In other words, it takes some time before wholesale market fluctuations are reflected in consumer prices.

Figure: TTF gas futures have fallen sharply since peaking in August 2022, but there is a time lag before these fluctuations are reflected in the indexation parameters 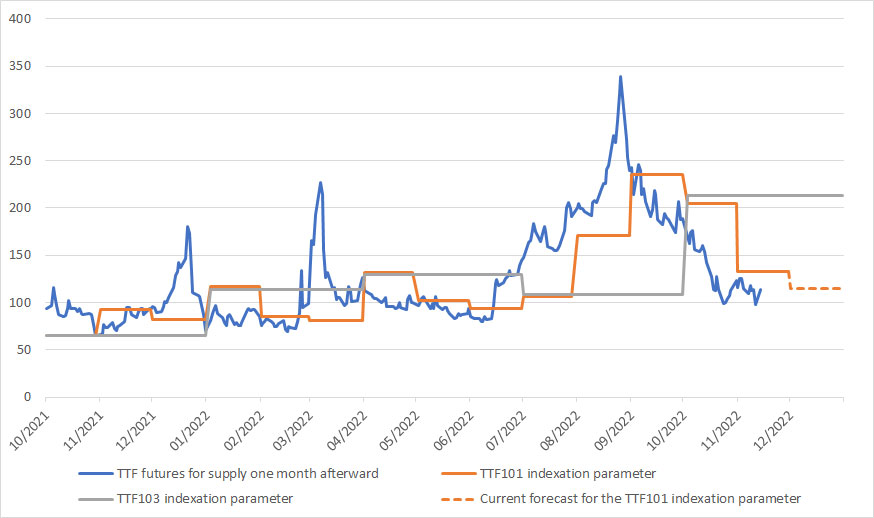 Sources: Refinitiv and own calculations for the TTF101 forecast.
TTF stands for Title Transfer Facility, a Dutch trading platform for natural gas, considered the reference for European natural gas prices.

Variable-price contracts are thus indexed using formulas which, prior to the energy crisis, were almost never changed, especially in the case of larger energy suppliers. These formulas consist of a fixed component and a component which varies based on prices on the energy markets, possibly with a time lag, and which thus uses the indexation parameter.

The indexation parameter itself may also be changed, from a monthly to a quarterly parameter or vice versa. In this case, the energy supplier is choosing the best parameter in order to ensure a good score when it comes to price comparisons.

Unsurprisingly, consumers are increasingly unable to see the forest for the trees when choosing an energy contract. CREG has also noticed this, labelling certain (but not all) of the formula adjustments described above as “unfair trade practices”. To this end, it issued a draft decision on 10 November, indicating that as from January 2023, it intends to require energy suppliers to observe stricter indexation rules, including an obligation to use monthly indexation parameters and thus not constantly switch between monthly and quarterly parameters and vice versa.

In this regard, it should be noted that existing contracts can obviously not be adjusted during their term and that only new contracts will be affected.

Are we overestimating inflation?

Predicting inflation has never been an easy task, and it’s not getting any easier. The volatility of the energy markets and changing indexation formulas make it difficult to establish accurate projections.

How exactly does the consumer price index deal with this wide variety of contracts? The consumer price index is constructed using the pricing terms of new contracts. The few households with fixed contracts at lower tariffs are thus ignored, as are those with variable contracts with, for instance, a lower "fixed component". The answer to the question of whether inflation is overestimated in rising energy prices thus depends on how one looks at it.

A fun fact is that, in Belgium, all running mobile phone contracts are taken into account when calculating the consumer price index. The telecommunication services index therefore reflects price growth in both new subscription formulas and formulas that are no longer offered. To this end, Statbel collects detailed information on each type of formula offered in the telecoms sector (which may only be used to compile the consumer price index). It is thus natural to question whether the same principle should be applied to gas and electricity prices.

What about at European level?

Most European countries use the same methodology to measure consumer energy prices. This is the case, for example, in the Netherlands, where energy prices and inflation are currently even higher than in Belgium. CBS, the Dutch statistics office, recently announced that by mid-2023, it will introduce a new methodology to include energy prices in the measure of inflation, precisely in order to give more weight to running contracts. It will do so using granular data on all (= running + new) contracts offered by various energy suppliers. There are exceptions, however. For instance, the German statistics office, DESTATIS, corrects for fixed contracts by using the average price for the past X months. However, this method does not fully reflect reality either, as it ignores, for example, the possibility of consumers switching during the term of their energy contract.

The difficulty in answering our question about inflation is due to the fact that a price index does not necessarily reflect the true cost of living. Especially today, there is a growing discrepancy between the two. The consequences of this gap are all the more significant in Belgium, as inflation is automatically offset by wage indexation and social benefits. If we want to ensure that the measure of inflation (e.g. the consumer price index) better reflects the true cost of living, more countries will have to follow the proposal of the Netherlands.